On a personal note 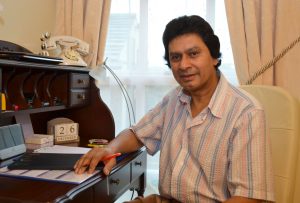 Mo’s parents uprooted their whole family, leaving Mauritius to a “better life” in the UK when he was 7.  Trying to fit into the local comprehensive, mid-year in the East End of London, when he spoke only broken French, among strangers with a different culture and outlook on life, dealing with winter when he had lived only in the Tropics, offered food that he did not recognise, being bullied because he was different was very daunting for a child.

Despite that, word soon spread among the pupils that Mo was a good person to talk to with their problems.

A client once said “I told my friend that this young counsellor is so easy to speak to, I always feel so much better after I have seen him”.

“Very early in life,” Mo says, “I realised the power of talk”.

It was a bank robbery that introduced Mo to counselling. Two men in balaclavas rushed in during the sleepy hours of the afternoon; one held a sawn-off shotgun to Mo’s face while the other shouted to the cashiers to empty their tills.  As they ran out, Mo gave chase and it was due to his intervention that the robbers were caught and the money recovered.

As a result, the bank sent Mo for counselling. Having experienced talking therapy first hand, Mo knew then that this was the path he wanted to take. And the rest is history.

Today, in spite of his several Diplomas, Mo travels around the country, attending courses and workshops – adding new skills and sharpening those that he already has but then, in counselling, the learning never stops.

Mo is passionate about his work and wants to make a real difference to the lives of the people he helps. As he puts it “I am the taxi driver, tell me where you want to go and I will get you there” and when the client puts their trust in him, Mo delivers.

Mo gives his time for free every Friday during term time to counsel children in his local primary school as he believes that early intervention can prevent problems in adulthood.

“Helping you find happiness through being you”.